On Friday, the federal government announced it was going to drastically change how it funds tertiary education. Effectively, they want to raise the price of humanities and arts subject areas to redirect students into more “job-relevant” sectors. There’s many reasons this is very bad. First and fundamentally, there’s the ethical and democratic issue of pricing people out of tertiary education. This move effectively means individuals will now pay practically half of their tertiary education out of their own pocket (via HECS), a crucial tipping point in consecutive governments’ slow destruction of free, or at least affordable, tertiary education—a basic feature of any functioning democracy. Beyond this fundamental attack on a bedrock of our society, it’s also bad policy for more straightforward economic and job-creation reasons. It won’t create the increased skills in the desired areas anyway (a grade 12 student doing English and History isn’t suddenly going to enrol in Medicine because its more comparably priced); the identified job areas, such as agriculture, don’t actually align with the skill areas the government itself has identified as lacking (which are themselves humanities areas); humanities students are crucial for subsidising the far more expensive science and engineering and medical degrees, so reducing enrolments in these areas will negatively impact the very disciplines the government claims to be supporting. The whole thing is a mess for a whole range of reasons, frankly.

Other people will write smarter things about the economic failings of this plan, but here I want to particularly discuss the government’s focus on ‘job-relevant’ educations versus, implicitly, ‘job-irrelevant’ educations (such as the education minister’s own Arts degree supposedly). This falls within a broader rhetoric espoused by governments and repeated by students, parents, media, and university management and marketing alike that universities must increasingly focus on producing ‘job ready’ graduates with ‘job ready’ skills. Not that artsy fartsy theory and history and critical stuff but the hard skills that you actually need in the work force. (The skills that, historically, was the responsibility of the companies to invest in so as to teach graduate hires, but which companies have now convinced universities is their responsibility, that graduates should be perfectly formed workers and able to slip into their company-specific pipelines).

Here’s the short version of this post: Job-readiness is a lie that only works to produce graduates less capable of dealing with the world they find themselves in, less well-rounded as human beings, less able to think on their feet, and less employable.

END_OF_DOCUMENT_TOKEN_TO_BE_REPLACED

2018 is bringing with it a whole lot of changes for me, one of which is trying to use social media a whole lot less while still maintaining relationships and friendships and discussions online. So that partly means a return to semi-regularly blogging, hopefully. So towards that, here is an update about some of the various big changes 2018 is bringing to my life:

END_OF_DOCUMENT_TOKEN_TO_BE_REPLACED

This is a modified transcript of the presentation I gave at DiGRA 2017. It marks the start of a new trajectory of research for me, but is also in a very preliminary stage. One day soon this will hopefully form the foundations of an actual academic publication, at which point I might have to take this page down temporarily for the sake of the blind peer review process. In the meantime, here is what I spoke about at DiGRA and what I am currently interested in.

END_OF_DOCUMENT_TOKEN_TO_BE_REPLACED

I would like to think I’ve written it in a manner that a non-academic and even a non-gaming reader might get something out of it. At least, insofar as that is possible for a PhD thesis. The genre that is the PhD thesis requires a certain denseness as you both have to prove you read all the correct things and be defensive of your position. That inevitably means the writing isn’t the most exciting thing to read.

But despite that, I am really happy with how it turned out, and I truly believe there is some significant stuff in here for both videogame studies and videogame criticism. I am really excited for you to finally be able to read it!

If you don’t want to read the whole thing or if you are just generally curious to see a deadline, this is how the thesis is structured:

The Introduction accounts for the importances of considering the player-and-videogame as a single object of analysis, rather than distinguishing them into a player/game hierarchy.

Chapter One introduces a bunch of theory and argues that how the participatory nature of videogames does not render them immune to textual analysis.

Chapter Two tries to find a more complex way of thinking about how we engage with virtual worlds through actual bodies without any sort of reductive and idealist way of presuming the player just ignores the actual body that the construction of the virtual depends on. A case study of casual mobile games is looked at to do this.

Chapter Three performs a close, descriptive account of the various complex ways the learned player’s fingers become adapted to the gamepad controller (and how gamepad controllers become adapted to player fingers) to forward a notion of ’embodied literacy’. I do this to challenge the reductive notion that gestural controls like wii-motes or touchscreens are ‘more embodied’ than gamepads or keyboards.

Chapter Four makes the argument that ‘action’ is too reductively considered when we talk about videogames and that ‘looking’ and ‘listening’ are acting in their own right. To say a play ‘does nothing’ during a cut-scene greatly misunderstands how bodies engage with moving images. This chapter looks at and compares Audiosurf and Slave of God to do this.

Chapter Six is a manifesto of sorts that is essentially saying that now that the previous chapters have challenged a bunch of ways we think about and evaluate videogames, this is what we can do now. Namely: we can account for and appreciate a much broader range of videogames that are obscured when we reductively and mechanistically think of videogames as simply digitalised non-digital games.

And that is what my thesis is about! Any of the chapters could be read on their own and would make some sort of sense, I think. But hopefully at least some of you are interested in reading the whole thing. If you do read it, do let me know what you think!

(Last week I attended and presented a paper at the DiGRA (Digital Games Research Association) 2015 conference at Leuphana University in Lüneburg, Germany. It was a really great, welcoming conference that I’m really glad I was able to attend. I was only able to attend because a whole lot of people were gracious enough to help fund me through a GoFundMe page. Because of this, I wanted to make my research as open and accessible as possible. Academia is already inaccessible enough through (often necessary) jargon and (only ever exploitative) paywalls, so to have my research essentially funded by a public readership and not be publicly available would’ve made me real uncomfortable.

So you can download and read the full paper I presented here. Further, here is an edited transcription of my talk from the actual conference, interspersed with my slides. Personally, I think reading the actual paper will provide a more thorough version of my argument, as I am a much better writer than speaker, but the transcript here is probably more accessible and digestible. You can also just listen to the audio here if you wish. The Q&A at the end is included in the audio but not in this transcript. You can’t hear the questions too well, but you can hear my answers.

Thank you, again, to those that helped fund my trip. Truly it was one of the better conferences I’ve ever been to. I was challenged, excited, drunk, tired, and challenged again each and every day of the conference. I made a whole lot of new friends and learned about a range of approaches to game studies I’d never heard of before.) 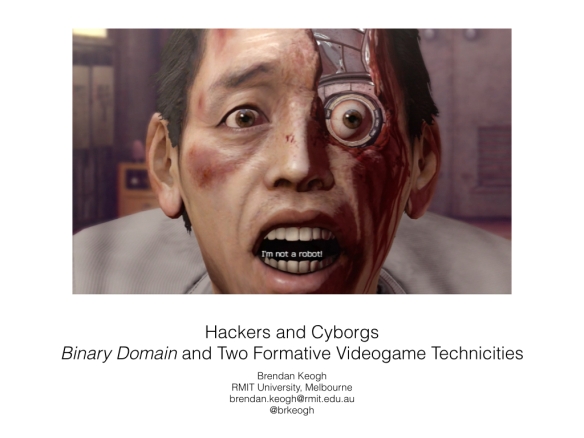 Hello. My name is Brendan Keogh. I’m a PhD student from Melbourne in Australia. My paper is going to be quite different from the other two in terms of approach. I don’t have numbers or empirical research or anything. It’s more just kind of an idea. I wouldn’t even call it a model; I think that would be too generous. This presentation is a side interest to my PhD research. I have this ongoing bugbear about presumptions we have both in popular non-academic game culture and in academic game discourses. I feel like we make a lot of presumptions about what values a videogame should have, and we don’t really question those. A videogame has to have a winning condition, for instance. We don’t stop to think why we think that. So then when a videogame doesn’t have a winning condition, we don’t know what to do about it.

So this has been a bugbear of mine for a long time, and I’ve found a lot of the cyborg theory from the 90s and 80s really useful in countering and unpacking this stuff. And then I played this Japanese game called Binary Domain and I’m like, wow, this really silly Japanese shooter is dealing with all these themes of cyborgism that I’ve been trying to talk about. So in this paper I’m setting up this metaphor, which is a false binary really, and I want to both be explicit about this and not overstate its usefulness.

Ultimately, you can think of videogame players as hackers or as cyborgs, and this can be allow insights into how videogame cultures are formed. END_OF_DOCUMENT_TOKEN_TO_BE_REPLACED