The Videogame Industry Does Not Exist: Why We Should Think Beyond Commercial Game Production (2023 (forthcoming), MIT Press)

The videogame industry, we’re invariably told, is a multibillion-dollar, high-tech business conducted by large corporations in certain North American, European, and East Asian cities. But most videogames today, in fact, are made by small clusters of people working on shoestring budgets, relying on existing, freely available software platforms, and hoping, often in vain, to rise to stardom—in short, people working like artists. Aiming squarely at this disconnect between perception and reality, The Videogame Industry Does Not Exist presents a much more accurate and nuanced picture of how the vast majority of videogame-makers work—a picture that reveals the diverse and precarious communities, identities, and approaches that make videogame production a significant cultural practice.

Drawing on insights provided by over 400 game developers across Australia, North America, Europe, and Southeast Asia, Brendan Keogh develops a new framework for understanding videogame production as a cultural field in all its complexity. Part-time hobbyists, aspirational students, client-facing contractors, struggling independents, artist collectives, and tightly knit local scenes—all have a place within this model. But proponents of non-commercial game making don’t exist in isolation; Keogh shows how they and their commercial counterparts are deeply interconnected and codependent in the field of videogame production.

A cultural intervention, The Videogame Industry Does Not Exist challenges core assumptions about videogame production—ideas about creativity, professionalism, labor, diversity, education, globalization, and community. Its in-depth, complex portrayal suggests new ways of seeing, and engaging in, the videogame industry that really does exist.

The Unity Game Engine and the Circuits of Cultural Software (with Benjamin Nicoll) (2019, Palgrave Macmillan) 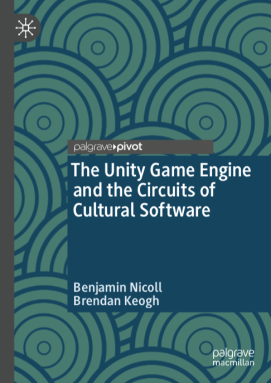 Videogames were once made with a vast range of tools and technologies, but in recent years a small number of commercially available ‘game engines’ have reached an unprecedented level of dominance in the global videogame industry. In particular, the Unity game engine has penetrated all scales of videogame development, from the large studio to the hobbyist bedroom, such that over half of all new videogames are reportedly being made with Unity. This book provides an urgently needed critical analysis of Unity as ‘cultural software’ that facilitates particular production workflows, design methodologies, and software literacies. Building on long-standing methods in media and cultural studies, and drawing on interviews with a range of videogame developers, Benjamin Nicoll and Brendan Keogh argue that Unity deploys a discourse of democratization to draw users into its ‘circuits of cultural software’. For scholars of media production, software culture, and platform studies, this book provides a framework and language to better articulate the increasingly dominant role of software tools in cultural production. For videogame developers, educators, and students, it provides critical and historical grounding for a tool that is widely used yet rarely analysed from a cultural angle.

“The game industry is notoriously opaque, even for insiders. This book lifts the veil of secrecy and demystifies how game engines are used, understood, marketed, and governed. True to form, Nicoll and Keogh provide an empirically grounded and highly readable account of game engines as ‘cultural software’. Scholars, students, and practitioners are sure to benefit from the savvy analysis of such a vital, yet seemingly invisible piece of software that powers a billion-dollar industry.”

“This original, timely, and accessible case study carefully unpacks the ambivalence of Unity’s claim to ‘democratize’ game development. Based on extensive research, Nicoll and Keogh propose a new conceptual framework to guide analysis of the cultural work of platform-based digital content production. This is a stellar example of how to advance critical media research on the materiality and politics of platforms.”

A Play of Bodies: How We Perceive Videogames (2018, MIT Press)

Our bodies engage with videogames in complex and fascinating ways. Through an entanglement of eyes-on-screens, ears-at-speakers, and muscles-against-interfaces, we experience games with our senses. But, as Brendan Keogh argues in A Play of Bodies, this corporal engagement goes both ways; as we touch the videogame, it touches back, augmenting the very senses with which we perceive. Keogh investigates this merging of actual and virtual bodies and worlds, asking how our embodied sense of perception constitutes, and becomes constituted by, the phenomenon of videogame play. In short, how do we perceive videogames?

This book challenges some of the dominant discourses of game studies in a way that is vital to the field right now. But it also adds a very specific focus on the body, which many people have referenced in game studies but not dealt with directly.

Brendan Keogh’s A Play of Bodies is a map to the future of game studies. Thoughtful and provocative, Keogh brings the body back to play in all its crucial multiplicities, and gives us a vocabulary for bolder, more inclusive games research.

Killing is Harmless: A Critical Reading of Spec Ops The Line (2012, Stolen Projects)

One of the most critically discussed games of 2012, 2K and Yager’s Spec Ops: The Line turns a reflexive lens back onto the genre of the military shooters to ask some hard questions: just what is going on in these games? What does it say about us if we enjoy playing such games? Is virtual violence really harmless? Killing is Harmless isn’t an attempt to answer these questions so much as an exploration of just how the game is able to ask them in the first place. It follow’s the lead character, Walker, in his steps across Dubai to discover just how The Line is able to make so many players interrogate their own complicity in virtual acts of violence.