Wolfenstein 2: The New Colossus is about the ultimate fragility of two types of bodies that underpin Western values: the male adult and the liberal state. Each is a conceptual object that we expect to function perfectly—right up to the moment that they break down completely when confronted with something they were never built to deal with. The New Colossus is interested in what it would take for either of these to fall apart.

William “BJ” Blazkowicz is the quintessential videogame protagonist: a large, rectangular slab of white man-meat whose very shape belies how he has been a part of videogames since his flesh was square pixels. In the previous game, The New Order, he was an unstoppable hero—right until he was stopped, at the end of the game, by a lone grenade. That game saw this relic of the past of both his own world and videogames, revived after 20 years in a coma, left behind for dead. But sequels do what sequels do, and BJ was rescued, if not salvaged. When The New Colossus starts, his body is still destroyed. The opening stage has you pushing BJ’s heavy body through the level in a wheelchair, shooting Nazi’s with one hand while the other is on the wheel. Stairs are inaccessible and when the wheelchair inevitably gets tipped over, BJ is helpless. For a significant portion of the game, you are stuck with 50 health, instead of the typical 100, in levels that feel like they were balanced for a character with 100. It’s frustrating. It feels like it shouldn’t be this hard. It’s the frustration of a perfect, white male body encountering something unfair that is just a typical day for anyone forced to live in this society with any other form of body.  END_OF_DOCUMENT_TOKEN_TO_BE_REPLACED 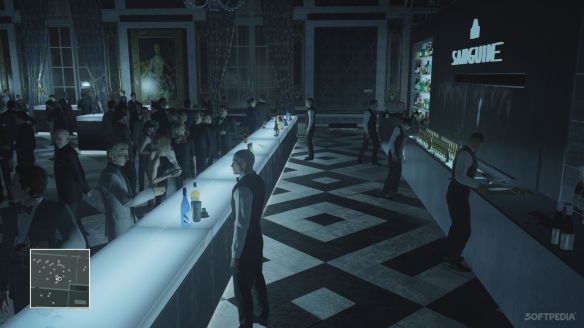 The superpower of the protagonist of most challenge-oriented videogames is time travel. Through the loops of failure and dressage that conventional videogame design depends on, the player fails at a task again and again until they have memorised how to proceed through the events that, on the current playthough, have not actually happened yet. This might be a muscle memory, ingraining in your hands the exact rhythm of movements required for a Rock Band track or a Super Meat Boy level. Or it might be a more traditional memory of remembering placements and patterns: the trap door full of monsters you could not have predicted in Doom kills you once and then, on the next attempt, you’re ready for it. Instead of dying you get a glimpse at what is about to happen. You remember what hasn’t happened yet.

The analogy has been made by various critics in the past (I think Janet Murray might have been the earliest) that the videogame player is not unlike Bill Murray’s character in Groundhogs Day, repeating the same system over and over again: at times taking it seriously, at times playing with the system, at times bored and frustrated by it. The more recent Edge of Tomorrow provides a similar conceit, but is I think more accurate of how videogames train players, killing Tom Cruise over and over again on the battlefield until he makes the exact right movements to get through it alive—exact movements he can only make with the memories possessed from the previous attempts. Edge of Tomorrow is how videogames work to train their players; Groundhog Day is more the wide range of emotions that players go through while existing in such a temporal spiral.  END_OF_DOCUMENT_TOKEN_TO_BE_REPLACED 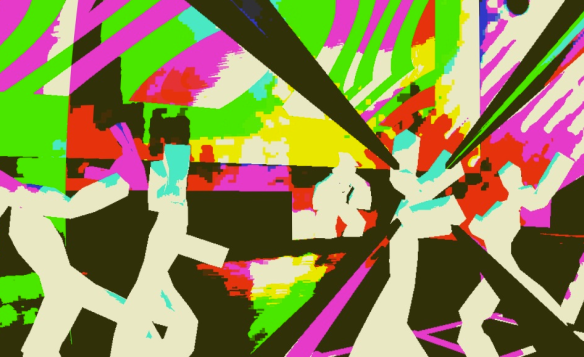 There is a nebula of essays and talks that circle the concept that we reluctantly call ‘game feel’. (No one likes this term, but it’s what we’ve got. Personally, I would like it if we borrowed from music and called it timbre or, at the very least, just talked about ‘how a game feels’ rather than ‘a game’s game feel’, but whatever). Across a range of talks and essays (some directed to designers and execution, some to players and analysis) is an emergent idea of the experience of videogames not being centrally one of engaging with mechanics but, rather, of encouraged affective states. Of some sort of fusing of meaty flesh with audiovisual signs and plastic buttons.

Historically there’s been a reluctance to talk about this because it’s soft, ambiguous, and wishy-washy. Talking about a videogame being tight or crunchy or sluggish or sticky feels like it is at odds with the hardcoded and definitive code and programming logic and on/off switches that videogames are made out of. We have historically intellectualised videogames as hard configurative systems while downplaying the fact that the reason we really play a videogame is because it feels real good within our soft meaty body. Videogames are a carnal pleasure. END_OF_DOCUMENT_TOKEN_TO_BE_REPLACED 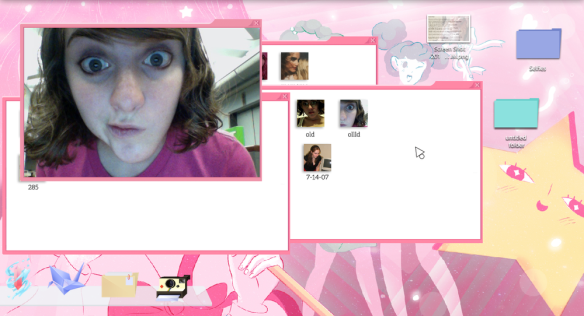 (Minor spoilers for Superhot and Cibele.)

Late last year I had the opportunity to play Eurotruck Simulator 2 with a virtual reality (VR) headset. Generally I am pretty skeptical of the marketing promises of VR and the whole project of immersion-through-escaping-your-own-bodily-senses that it depends on. Partially, this is because we are being told the same things about how VR is just around the corner in 2016 as we were told in 1996. Mostly, though, this is because I reject the very premise of VR, that the player can ever truly have their consciousness and senses detached from the playing and situated body they are sensing with. Sure, I can use a VR headset to explore some alien battlefield, but I am never not sitting in a chair in front of a computer, and on some level my mind is always aware of this because my mind cannot exist separate from that body.

But Eurotruck Simulator 2 with a headset shocked me with its effectiveness. It was disorientating and fully encompassing. I had the stupidest grin on my face as I noticed my own senses being so successfully tricked by the illusion that I was really sitting in this truck. The only other VR experience that I have found nearly as affecting was when I played USC’s The Meadow at Indiecade. This was a VR experience about sitting in a virtual meadow while things happened. The visuals in no way attempted photorealism, but the illusion was, again, incredibly affecting

I remember semi-jokingly calling it a ‘sitting simulator’ at the time. Except this is exactly why both The Meadow and Eurotruck Simulator 2 made such powerful VR experiences: because they each accepted and reinforced the player’s own awareness of their sitting body, rather than stubbornly trying to distract the player away from that body. Players are bodies and that will never not be true. Where other VR experiences work to have you forget “the meat and all that it wants” as Neuromancer’s Case says, these two experiences reinforce the strength of their illusive worlds through the player’s own somatic awareness of being a sitting being.

I’ve played two games in recent weeks that in different ways draw attention to the player’s inescapable existence as a body sitting before a computer screen: Nina Freeman’s Cibele and Superhot Team’s Superhot. I played neither of these games through a virtual reality headset, but like the above virtual reality experiences, each of these games worked to use the player’s tacit awareness of their own body-ness as part of the experience of a virtual world. More specifically: each is explicitly conscious of the player’s context as a body sitting before a computer.

END_OF_DOCUMENT_TOKEN_TO_BE_REPLACED

On the first day of Firewatch, you are walking back to your tower after chasing down some irresponsible teens when a shadowy figure shines a torch in your eyes. You are in the middle of the Wyoming wilderness and no one is meant to be around, but now this man is looking right at you. Henry, your character, is startled by it, but Delilah, his workmate-cum-friend in another tower is nonplussed: it’s the wilderness, of course there are going to be some other people around. Sure, okay. But at the same time, the reason there might always be someone around is because, for the overwhelming majority of the time, there is definitely nobody around. That is why my reaction to the man was the same as Henry’s: I was startled. I was expecting, moment-to-moment, to be alone, to be that one human who happened to be in this particular bit of wilderness. Then suddenly there was movement. That was terrifying.

For most of Firewatch, you don’t see anyone. But the fact you did see someone that one time kept me constantly on edge as the game progressed. What if someone else just jumped out from behind a tree or walked down a distant path? “We can animate humans in this game,” that first reveal seemed to say to me. “We can do it again whenever we want.” That would be terrifying to see that movement. The absence of animals in this national park only amplifies that terror not of being alone but of potentially suddenly not being alone without any warning.

This is where I think Firewatch is most enticingly like Gone Home. There are easy comparisons to make between the two games: each is a walking game set in a semi-open world where you walk around and inspect objects and a story progresses. Each is a game about difficult personal relationships set in the late 20th Century. But these are easy comparisons to make. More interesting for me is how each game is about making you feel very, very alone, and then playing on your imagination to make that loneliness feel oppressive and terrifying, and then, finally, making you feel like an idiot for letting your imagination get so carried away. END_OF_DOCUMENT_TOKEN_TO_BE_REPLACED 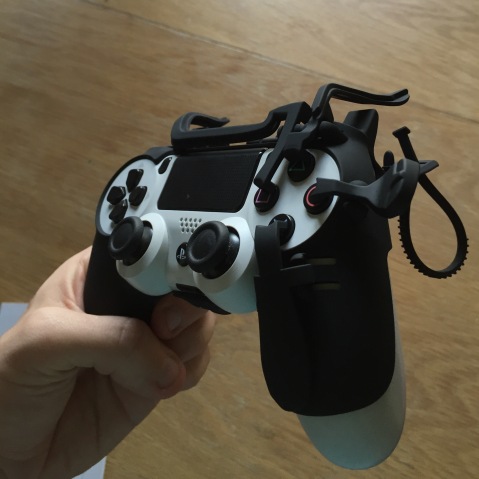 Yesterday I obtained an Avenger Reflex controller skin for my PlayStation 4. I bought it because these things fascinate me, and I want to do some research on them from a phenomenological perspective on how bodies integrate with videogames (I wrote briefly about this here). When I tweeted about my new possession, however, it was a side comment I made about a marketing blurb on the box that got the most attention.

The blurb promised that the controller skin will “Increase your PS4 gaming skill without cheating!” I find that fascinating. This device is confident that it will give its user an advantage over other players, but it is categorically ‘not cheating’. I am not particularly interested in claiming that it either is or isn’t cheating. Rather, I think a lot of fascinating insights can be pulled out of a statement such as this one to better understand videogames generally: why is using this device to improve your chances not cheating? What sort of advantage would be considered cheating? Why? END_OF_DOCUMENT_TOKEN_TO_BE_REPLACED