On the first day of Firewatch, you are walking back to your tower after chasing down some irresponsible teens when a shadowy figure shines a torch in your eyes. You are in the middle of the Wyoming wilderness and no one is meant to be around, but now this man is looking right at you. Henry, your character, is startled by it, but Delilah, his workmate-cum-friend in another tower is nonplussed: it’s the wilderness, of course there are going to be some other people around. Sure, okay. But at the same time, the reason there might always be someone around is because, for the overwhelming majority of the time, there is definitely nobody around. That is why my reaction to the man was the same as Henry’s: I was startled. I was expecting, moment-to-moment, to be alone, to be that one human who happened to be in this particular bit of wilderness. Then suddenly there was movement. That was terrifying.

For most of Firewatch, you don’t see anyone. But the fact you did see someone that one time kept me constantly on edge as the game progressed. What if someone else just jumped out from behind a tree or walked down a distant path? “We can animate humans in this game,” that first reveal seemed to say to me. “We can do it again whenever we want.” That would be terrifying to see that movement. The absence of animals in this national park only amplifies that terror not of being alone but of potentially suddenly not being alone without any warning.

This is where I think Firewatch is most enticingly like Gone Home. There are easy comparisons to make between the two games: each is a walking game set in a semi-open world where you walk around and inspect objects and a story progresses. Each is a game about difficult personal relationships set in the late 20th Century. But these are easy comparisons to make. More interesting for me is how each game is about making you feel very, very alone, and then playing on your imagination to make that loneliness feel oppressive and terrifying, and then, finally, making you feel like an idiot for letting your imagination get so carried away.

Here are some points I made about Gone Home back when I played it:

Gone Home is a scary game. The things that scare you are the things that scare you as a teenager. Childish fears that you are old enough to know are silly but not old enough to completely disbelieve. Ghosts, dark rooms, absent parents, eery answering phone messages. When you’re a teenager, the world is so dramatic. Everything that could go wrong will go wrong. Playing through Gone Home, I was certain from the start that everything was going to go wrong (but surely it wouldn’t). There would be ghosts (but surely not, right?). Something would move in a dark room (but it wouldn’t, surely (but I should leave all the lights on just in case)). My entirely family was going to be dead (well probably not, but surely). Lots of things made me nostalgic and melancholy in Gone Home, but its defining sensation was one of dread amplified by a hyperbolic, adolescent imagination.

Which, now that I write that, makes me think back to when I talked to Walt Williams at GDC and we discussed how videogames aren’t a ‘young’ medium but an adolescent medium in the way they think they are being all dark and serious in really immature ways. Gone Home plays to the strengths of an adolescent medium, feeding on my juvenile fears that something terrible is surely going to happen eventually because this is a videogame.

I love the way Gone Home plays on Horror tropes to build that sense of trepidation and forewarning. The stormy night in the woods, the eerie old mansion, the missing family, those (at first) messed up answering machine messages. I was terrified for most of the game, just waiting for the inevitable ghost. When the lightbulb burst as I picked up the crucifix, I almost had to stop playing. When I found a room in the basement where the light wouldn’t turn on, I refused to enter. My mind turned the shapes of curtains and shadows into people staring at me. The tropes of the Horror genre reverted me back to being a terrified teenager who should probably know better but really doesn’t. Like the time I freaked out when I was 15 because there was a guy getting out of a car in front of the house and it was just dad’s friend dropping by. Something about being a teenager means you always expect the worst. Because being a teenager is dramatic, right? It’s a time of constant change and impermanence and everything new that you discover you want to hold onto but it’s going to be lost the moment you finish high school or move to a new town or enter puberty or whatever. Until the closing moments of Gone Home, I expected the worst.

But then it all makes sense. My parents are away at a counselling retreat (for reasons I understand based on the objects scattered around the house). My sister hasn’t killed herself like some TV-trope depressed gay teenager. She has run off with the love of her life. Of course the house is a mess, then. Of course! it makes sense now. Like the shadow of a terrifying monster turning into a coatrack, everything makes sense in hindsight. How silly was I! Everything that was scary wasn’t actually scary. It was just my imagination, moulded like clay by this masterful game and its genius creators. This is why you want to play the game not knowing anything about it. To feel that trepidation. To not be sure if there are ghosts or not but surely there aren’t but maybe there are. To bring in your expectations from other media that the gay teenager surely killed herself and have that expectation shattered.

Firewatch does much the same thing. Over the course of the game, Henry and Delilah begin to suspect that someone is watching them, following them, recording their conversations. Unlike in Gone Home, however, in Firewatch you get proof that this is actually happening. But just like Gone Home, the actual conclusion, that this was just some guy hiding out in the woods because his son died in an accident, is far less absurd than the hyperbolic conspiracy theories that Henry and Delilah (and myself) were considering.

Another key difference: in Firewatch, you are being watched. Almost always. Gone Home evokes the feeling that their could be someone hiding in here. Firewatch regularly makes it explicit that despite your sense of overbearing loneliness out in the wild, there is always someone watching. At the start, it is just Delilah in her tower, but even that is a bit off-putting. Later, the man looks at you, blinding you in the process, and walks off. Later, in the game’s only (and fully deserved!) jump scare, someone hits you over the back of the head. Later still, in the game’s most chilling moment, a third party coughs over the radio. Firewatch is a panopticon. You are always alone and you almost never see anyone, but you are always being watched. Or, at least, you are being watched often enough that it might as well be always.

This was strikingly powerful. For the latter half of the game, I was regularly stopping and looking behind me, scanning the trees for movement. I’ve played Slender before. I know how this shit works. Whoever is out here is going to get me and I have to stay vigilant. I was reminded of poking my head into each dark room of Gone Home, finding the light switch, and beelining straight to it just in case someone was hiding in the shadows. But Gone Home never flaunted with me its ability to actually render human beings; Firewatch had. I know, technologically speaking, there could be a person behind me. Of course, no one ever was and, except that one scripted time, no one attacked me from behind again in Firewatch. But the sense that they could was palpable. 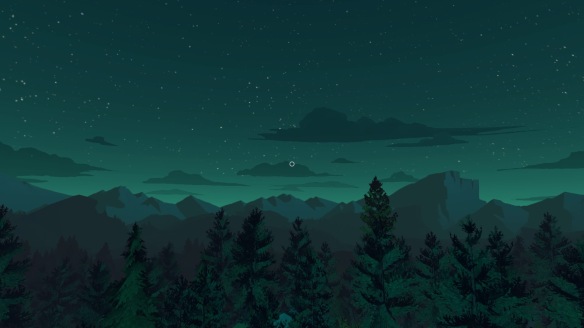 Gone Home and Firewatch each masterfully use the oppressiveness (even the claustrophobia) of being alone to trick you into terrifying yourself. Techniques wise, though, they are quite different. Gone Home is less explicit. It presents traditional signifiers of the Horror genre and creates a general atmosphere that leads you to trick yourself into thinking something terrible is going to happen when, really, nothing bad happens at all. Firewatch is more explicit. Something is happening. The characters themselves are freaking out in the very same way the game hopes the player is freaking out. Not just the protagonists, but the actions of the man in the woods are also driven by a suspicion heightened by loneliness.

This isn’t to say that Firewatch is more heavy-handed than Gone Home, but just that they use different methods to go about evoking a similar sensation in the player. Gone Home plays off your expectations based on past experiences of genre; Firewatch exploits your empathy for and embodiment with the playable character. This is seen most clearly in the encroaching fire in the later days of Firewatch. As the wilderness feels less like an escape from Henry’s problems and more like the problem from which he must escape, your surroundings become more cloying, more oppressive. The crisp blue skies are slowly taken over by smoke and yellow until, on the final day, it is essentially apocalyptic and you have got to get out of there.

The sense of loneliness-but-not-alone is continued right until the game’s closing moments. You never see the man in the woods but just the hideout he left behind. You never see Delilah, but just the tower she left behind. In each you find evidence of their constant surveillance of you. It is equal parts heartwarming and sad and eerie to be where Delilah was but moments too late to actually meet her, to connect with her. You find her tequila and the picture she drew of you which, while nice, also just reinforces that sense of being in a panopticon. She knows I’m a white guy in shorts. But I know nothing about her. Throughout the game I would look at her tower and hold down L1 to zoom and just wait for a flicker of movement to suggest I have managed to see her. But all I get is the tower lights telling me that she can see me.

At the end of Gone Home, I mostly felt happy for the characters (and sad for my own nostalgic connection to that decade that will only grow fainter with time). My sister was all right and not only was she all right but she was with someone she loved. At the end of Firewatch, when I finally saw another human being as I was lifted into the helicopter, I mostly felt sad for Henry. He escaped the oppressive panopticon of the Wyoming wilderness but he was still alone. No Julia, no Delilah, no escape to the wilderness. Just a masked nameless figure in a helicopter and a wedding ring I just happened to put on before the fire overtook the tower that had been his one attempt to get away from it all.