I made a Super Mario Maker level recently called “You Need Two POW Blocks” (7A92-0000-00EB-B2CB). It’s an autoscrolling level, so you can’t go back towards the beginning. At the end of a corridor is a door floating in the air, two grid cells up from the ground. The only way to enter this door is to place two POW blocks on the ground underneath it, one stacked on the other. The only POW blocks on the level, however, are back at the start, and you can only carry one at a time, and you can’t throw a POW block without destroying it. I made this level once I noticed that if a POW block or P-Switch falls on your head while you are already carrying one, it will bounce forward until it lands on the ground. If the player is very careful, they can move a falling POW block by headbutting it down the corridor, and thus end up with two POW blocks at the end of the stage. 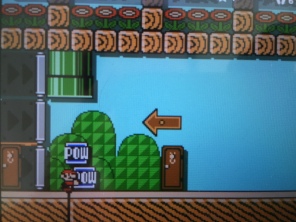 This is probably not a good level, in the sense that no one who has played the stage on Super Mario Maker’s online community is yet to actually complete it. It is frustrating and obtuse, and it is not entirely clear what you are meant to do. Indeed, no one has completed the last four levels I’ve uploaded. Each of them require fairly intricate and fiddly combinations of Super Mario World mechanics that the original game never actually required. On one stage you have to throw a red shell in the air, then do a spin-jump to catch the shell in mid-air and land on a piranha plant to spin-bounce over a canyon with the shell in hand. On that same stage you have to jump on a P-Switch in mid-air, and somehow get a POW block to the top of a beanstalk. END_OF_DOCUMENT_TOKEN_TO_BE_REPLACED

I didn’t grow up with Super Mario. My experience of Mario games is for the most part fragmented and third-hand. A friend owned a copy of Super Mario All Stars so I would see the first few stages of each Mario over and over again every time I visited. In high school, when I was getting into emulators, I would load up the same games, play for five minutes sitting stiff-backed at a keyboard, then never play again. In the last couple of years, I played both Super Mario Bros. and Super Mario World to completion on my WiiU and felt like I finally understood why these games were significant beyond the fact that many of my peers played them as a child.

And despite my frustration with the narrowness of videogames’ accepted canon (“Oh wow you’ve never played Super Mario World before??”), these are important games. They’re elegant, clever, well designed, imaginative. They’re the kind of games that if I played them in the late 80s or early 90s I would have been absolutely captured by their charm and the way they suggest through hidden paths and invisible blocks the existence of countless mysteries to discover.

Most crucially is the movement. The “sticky friction” of Mario’s inertia that makes momentum so crucial and movement constantly fluctuating between frustrating and fluid. While other platformers see movement as just the baseline on which ‘real’ interactions are developed, the Mario games understand that movement itself (of fingers, of avatars) forms the base pleasure of videogame play.

It’s for this reason alone that Super Mario Maker works as well as it does. Outsourcing level design to players was always going to result in an overwhelmingly number of mediocre levels. But that’s okay, because each and every level give you a new environment to move Mario through and a constantly new environment to explore. Movement and exploration have kept Mario fresh for thirty years now, and Super Mario Maker taps into this. END_OF_DOCUMENT_TOKEN_TO_BE_REPLACED