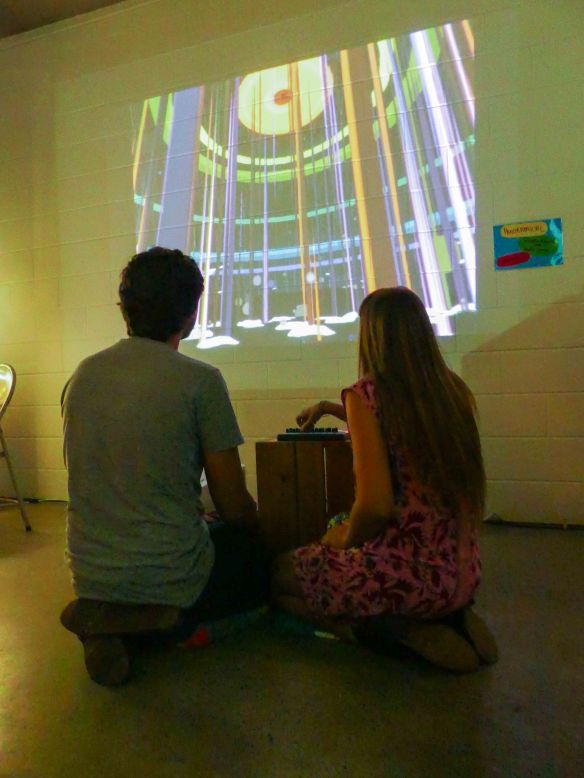 (All photos by Sofie from SK Games)

Back in January I wrote a post about how I would like to try running a public game event. A couple of weeks ago, thanks to SK Games and a whole heap of people, I was able to actually do this with the inaugural Trees Go Ping. It went really well! A bunch of people rocked up on a weeknight and people seemed to really enjoy the games and the atmosphere. It is definitely something I would like to do again. This post serves as both a reflection of how it went, and where I want to take Trees Go Ping in the future.

We showcased four games: Push Me Pull You, Brolly Folly, Reflection, Panoramical. Three of these games are Australian. Those three games are also from Melbourne. All the games were by guys.

Push Me Pull You and Brolly Folly were big hits as the multiplayer titles, of course. These are both games I love created by Melbourne developers I think are doing very exciting things, and to have the opportunity to put their creations in front of people was really wonderful.

Reflection was great, but didn’t quite work as planned due to the particular lighting of the venue and where the game was placed. Too much light behind the player and not enough in front of them for the webcam to work effectively. People ending up just picking up the webcam and pointing it at stuff. That was cool too.

Panoramical worked exactly how I hoped it would. I really want to regularly have those sort of weird audiovisual ‘videotoy’-like games in the background that can just look after themselves for the most part but also have a player come along and poke at them and join with them for a while. We had a midi controller on a crate with some cushions, and players could come along and turn some dials and see what happened. When no one was playing, the game would just play itself for a while and occasionally cycle through levels. So no matter what happened, there was always some sort of music and visuals filling the space. This was really special. If anyone has suggestions of similar games that could be used in this way, I would love to hear about them. I am considering how UN EP might be used in this way. Nidhogg could kind of be both this and another multiplayer spectacle at once.

I had a little bit of anxiety about not showing any local games, but I also didn’t consider the event as any sort of local industry showcase. The games that I showed are ones I want more people to play, but which generally require this sort of environment to be appreciated, so I see the event more as an opportunity for local audiences to engage with particular games than for local developers to have a platform. But going forward, there is no reason both needs can’t be served. I would definitely love to hear from local creators who are creating things they think would fit in such a space. It would be great to occasionally do a Queensland showcase at some point.

What bothers me much more is that all the games I displayed are by men. That is not something I would like to become a trend. Neither is it something I am interested in making excuses for. I had a short time to prepare and I used the games I had available to me on that short notice. That is not a justifiable reason so much as it is evidence at how easy it is to become part of the problem when you are not actively ensuring you are part of the solution. In the future, I’m determined to put in the effort to ensure there is better representation of the diversity of developers in the games I exhibit. So I particularly encourage woman and non-white developers who think they have games that might fit such an event to get in touch with me. 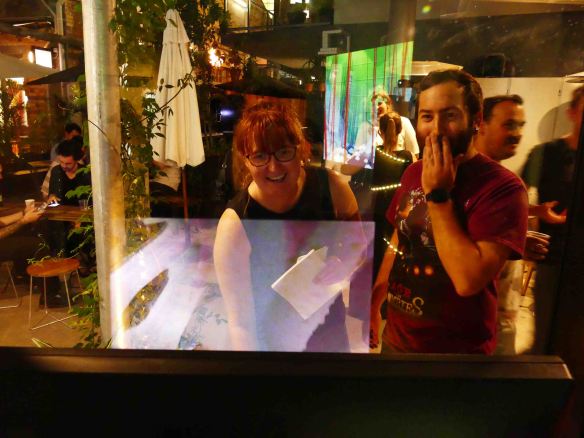 None of the games look like ‘gamey games’. There was no pixel-art. Just vibrant colours and soundscapes and everyday objects. This, along with the gallery setting, I think really made the event more friendly and accessible. We had people dropping in who were just passing by to see what was going on, which to me is the greatest marker of success. It is very difficult to make videogames not look exclusionary. I remember a Freeplay event in Melbourne where we set up some games on the big screen in Federation Square. When we had Hokra playing, people would just walk by and refuse to play. It looks too ‘videogamey’. When Push Me Pull You was on the screen, however, with its distinct and organic style, people were much more willing to try it out.

This is really important, I think. Game events need to be detached from gamer culture and its most visible markers, if such events are going to attract a more generalist audience. Holding it in a space like an art gallery obviously helps to this end. Also the fact we were distributing local zines really helped here, I think. It was games as part of a broader creative practice, not as a mere extension of geek culture.

We had developers, students, avid players who I know through social media circles, friends of the art gallery, and just general people rock up, and I am really excited by that eclectic mix. I think we succeeded in making it feel welcoming.

The gallery was This Must Be The Place in the middle of Fortitude Valley. It’s a beautiful little gallery space at the end of an alley run by some great people. It worked perfectly as there was room outside for people to just go and sit down and get away from the lights and sounds for a while without having to leave the venue entirely. I will be talking to the gallery owners in the near future and hopefully it will become a regular home for Trees Go Ping.

By our rough count (‘rough’ because I was personally terrible at updating the count when I was on the door) about 70 people came through the door. Most were happy to pay the $10, and a few that we let in for free just to have a look came back later to stick some money in the tip jar. I imagine we could get a bigger crowd in the future if we ran on a weekend instead of a weeknight.

Without going into too much detail, the event essentially paid for itself. The main costs were alcohol and space hire, and these costs were made back from the door charge, tips, and baked goods.

But it did not really make any profit. That is fine, as I am much more interested in such events being sustainable than I am in them being profitable. However, this event was also only able to run on the generosity of SK Games supplying two projectors and three computers and a bunch of controllers in addition to the hardware I have purchased with my own money that the event certainly did not cover.

To run more events of a similar size but without someone else supplying the hardware, I would need spend at least another $2000 on hardware. At least. That is a big investment! I am considering ways this might be achieved. The simplest seems to be to do a single crowdfunding drive for the hardware. If you’re a developer who has something unreleased or would like to make something not yet released to be a reward in such a crowdfunding drive, let me know! Alternatively, we just actually start charging money for alcohol and try to make a profit that way, but I don’t like the idea of making the events expensive. 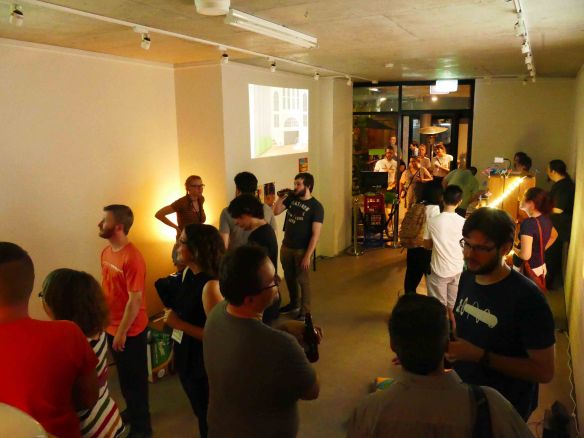 I am indebted to SK Games’s Louie and Sofie firstly for making the generous offer of lugging the necessary hardware across the country from Perth to Brisbane so that I could run an event in the first place without spending thousands of dollars before hand. I literally could not have done this without them. But even more, the amount of expertise and experience they brought with them in how such an event should be setup and run was invaluable. Sofie also made the event posters, which I never would have got around to doing. Sofie also took a bunch of photos at the event. I keep returning to this paragraph and adding even more stuff that SK helped out with. I really can’t thank them enough.

Huge thanks to my partner Helen who sat at the door for most of the night and took people’s money, and also helped us setup, drove us around, and folded about a million zines. She also made the chocolate crackles that were a hit at the bar.

Huge thanks, too, to my friend Heidi who made all the signs for the event and also the cookies that were also a hit at the bar.

My friend and colleague Christy Dena has been a huge support since I first mentioned to her that I want to try to run an event like this. Christy (and others such as the local IGDA) have been doing community-building game stuff in Brisbane for years through events such as public lecture series and other game shows, and without her tips and feedback and contacts I would have had a much harder time getting this off the ground.

This Must Be The Place were superb hosts and showed a great enthusiasm for the idea of putting videogames in their space. They host a whole bunch of exhibits and greatly support the local scene and you should totally check them out.

So that is how it all went! If you came along, I hope you had a blast. If you didn’t, I would like to know why! If you want to keep up-to-date on Trees Go Ping and what happens with it in the future, I have made a Facebook page I’ll update with new events. I will also have photos uploaded shortly that Sofie took at the event, including those on this post. I’ll get around to making a website for those of you that don’t use Facebook at some point in the near future.